Look around and it’s easy to spot everyday items made using particle accelerators.

From high-tech smart phones and laptops – any device with a chip – to seemingly low-tech insulation on cables and plastic-wrapped food, nuclear technology is in everything these days.

In all, 11 major industries use particle accelerators. And the Nelson, BC technology company D-Pace makes their components, which in turn make millions of things.

Coming home to the Kootenays

Dr. Morgan Dehnel founded D-Pace in 1995. Nelson born-and-raised, he finished his PhD at University of BC when his wife Trish was offered a job as a city planner in Nelson. So, the couple came back to his hometown, where he started Dehnel Consulting, now Dehnel Particle Accelerator Components & Engineering – “a mouthful,” he says, which is why it got simplified to just D-Pace.

The move paid off. For one, property and commercial space is much more affordable in the Kootenays. Another selling point: Nelson is a walkable city unlike his last gig at a lab in Vancouver.

“If you wanted to see your lawyer or accountant or get office supplies (in Vancouver), it was an hour in your car,” Morgan says. Working in downtown Nelson, he can find everything he needs within a few minutes walk of his office.

Morgan loves how he can work globally and live locally, enjoying Nelson’s restaurants, arts, the lake, biking, skiing, the wilderness, “and do all your techy work.” 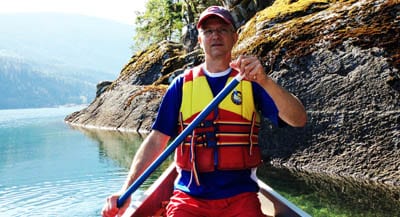 Selling globally from a small town

The company’s Nelson headquarters does the IT, but 99 percent of D-Pace products are manufactured and sold overseas. So, Morgan logs roughly 150,000-plus miles per year of jet setting with Air Canada. His job these days is a mixture of sales, marketing and R&D, going to labs at GE, Siemens or Mitsubishi, for example, and finding out what they need.

But as the particle acceleration biz speeds up, Morgan, 55 this year, is looking to slow down. D-Pace is at a levelling off stage now – a chance to make profit, not just focus on research.

The company stands on its own, he says proudly. “I think that’s healthier.” 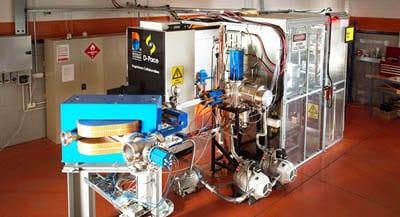 When Morgan started his business more than 20 years ago, there were few technology companies based in the Kootenays. But that’s changing.

Today the region is home to a growing number of tech start-ups and established companies. Remote workers and digital nomads also choose to base themselves here. With high-speed broadband Internet and availability of air travel, Morgan and tech entrepreneurs like him have shown it’s possible to serve international clients from a small town in the Kootenays.

Over the next few weeks, we’ll use this blog to feature a number of tech workers who live and work in the Kootenays.

This blog post is part of an ongoing series focused on people who work in the technology sector. It is supported by Imagine Kootenay and Kootenay Association for Science & Technology (KAST).