Standing below the infamously steep Link’s Line run on RED Mountain Resort as it bustles with Canada’s best freeriders, Ryan Lachapelle can’t help pinch himself. Eight years earlier, he was a typical, young ski bum fresh out of high school. Today, at the tender age of 26, he’s getting paid to organize the Canadian Open Freeskiing Championships at one of British Columbia’s snowiest resorts, high above the fabled town of Rossland. As RED’s events coordinator, his only lament is he’s too busy corralling everybody else to compete himself: Ryan also produces the mountain’s online video content with his own jaw-dropping skiing.

“I came here for my passion,” he says, “and that’s turned into a career for me.”

Growing up in Collingwood, Ontario, with a snowblading mom and a family of skiers, it was no surprise when he chose to move west after high school. He spent that first season teaching skiing at Sunshine Village, Alberta, but his aim was to live in the Kootenays.

“My legend mom found the Ski Resort Operations Management Program at Selkirk College in Nelson,” Ryan explains, “and that was the ticket.”

Two years later, he graduated, spent a couple seasons working at the Revelstoke Outdoors Centre as a senior sales representative, then became the sales and marketing coordinator at Castle Mountain Resort near Pincher Creek, Alberta, and then finally landed his ideal gig at RED. Now going into his third year there, his energetic and endlessly goofy personality have caught everybody’s attention. 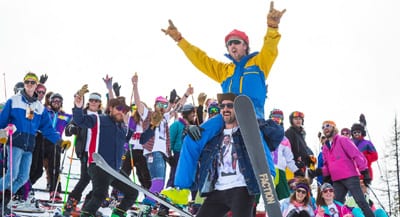 Along with his best friend and fellow Ontario transplant, Kenneth McAlpine, Ryan was even selected to compete in The Amazing Race Canada last year under the moniker of “Team Give’r.” It’s a word he says embodies his approach to everything in life, including work.

“What stands out is his energy and commitment,” says Nicole Briggs, RED’s marketing and events manager. “He’s constantly on the go with something, and he’s quickly becoming the face of RED. We’ll keep him for as long as we can!”

Ryan, for his part, says he’s “definitely found his place.” But, in the spirit of “given’r,” he also wants others to realize their dream jobs. One of his major goals is to help teach the same program he took at Selkirk College. At this pace, there’s no doubt that’ll happen, too.

Want to work in the Kootenays like Ryan? Visit the go2HR Job Board today!