Until recently, the Kaslo Hotel made do with spotty internet. Besides less-than-ideal speed, a freak windstorm or downed tree could easily knock out the internet for days. And for a growing business, that just wouldn’t do.

“Life, at least from an internet perspective, was really difficult,” says Peter Gustafson, who handles I.T. at the hotel. “Up here in the mountains, anything can happen.”

As far as I.T., the hotel has lots. There’s its point-of-sale systems for the restaurant and bar, the online reservation system, remote monitoring for its security cameras, video-conference capabilities, and a phone system that relies on VoIP (Voice over Internet Protocol), none of which would be possible without a high-speed broadband connection. Not to mention that hotel guest these days expect good Wi-Fi.

Why couldn’t the hotel get decent internet? The price was prohibitive. But that all changed with a low-cost, high-capacity submarine cable beneath Kootenay Lake. Now, the hotel offers a veritable all-you-can-eat internet buffet with bi-directional Wi-Fi – meaning guests can upload and download data at the same speed. Peter also says the hotel plans to shift to streaming video TV in its rooms. 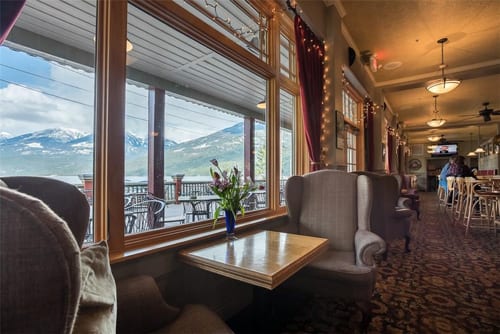 The idea of a high-speed, submarine fibre optic cable had been floated for years. Given Kootenay Lake’s mountainous, heavily treed terrain, and distances between towns, the solution seemed obvious: Can’t go over it. Can’t go around it. Have to go under it.

But big internet companies tend to focus on delivering broadband solely to markets with thousands of people. Building a high-speed underwater network seemed like a pipedream for a town Kaslo’s size. Enter the Kaslo infoNet Society (KiN), a non-profit formed to guide and implement a regional broadband system.

“At the end of the day, all I wanted was a smoking-fast, symmetrical, low-latency connection to an IX (internet exchange) point in Kaslo,” explained Tim Ryan, who sits on the KiN board. Ryan had been in the I.T. industry as long as there’s been one, and was one of few who knew how to pull it off.

The irony is the Kootenays already had high-speed broadband internet since 2001 – at its hydroelectric dams. The power business requires high-speed communication and real-time computerized control between sites to manage electricity demands and monitor equipment, plus about a million other technical things. 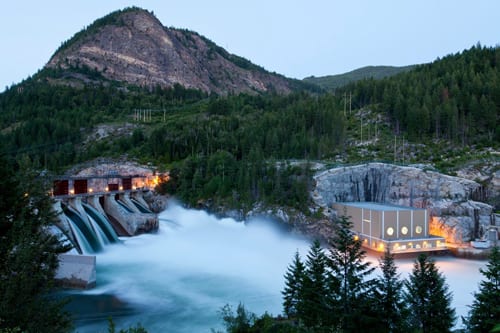 So there was always an opportunity in the basin to distribute more than electricity. But, after a series of failures trying to turn the network into usable public broadband, the initiative went “spectacularly bust,” says Tim.

By 2012, the Columbia Basin Trust purchased these assets and formed the Columbia Basin Broadband Corporation (CBBC), repackaging the digital infrastructure as a 40-gig loop. There was just one little problem: it didn’t connect to anything. The main connection point was across Kootenay Lake in Balfour.

The CBBC needed to partner with an internet provider. In 2014, KiN inked a deal with CBBC to manage internet distribution in Kaslo, and funding from local, provincial and federal sources subsidized “last mile” construction. Downtown Kaslo was officially on fibre, and the Kaslo Hotel its first subscriber.

As for other parts of Kootenay Lake, KiN needed a proof of concept to show that submarine fibre-to-home was even feasible. So, KiN laid 1.5 kilometres of fibre optic cable across Kaslo Bay from downtown to a residential subdivision just to prove it could be done. 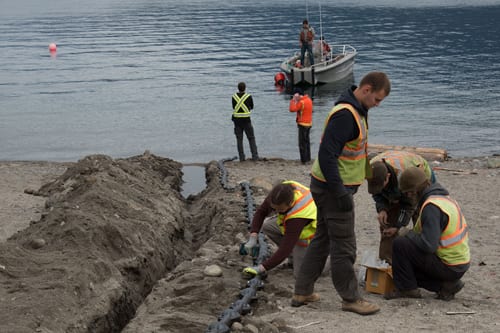 By 2018, KiN laid an additional 35 kilometres of fibre underneath Kootenay Lake. This connected Kaslo with the CBBC network, and provided a powerful pipeline of internet to over 700 homes around the lake. Today, the system provides 100 Mbps unlimited usage to subscribers — the only rural area in the BC Interior with such a system.

From there, regional towns and businesses jumped on board. It wasn’t about selling internet, it was about selling economic development. You could always live in the Kootenays, but now you could thrive in the digital age. Now, in addition to Kaslo, the northern Kootenay Lake communities of Ainsworth, Argenta, Cooper Creek, Fletcher Creek, Johnsons Landing, Lardeau, Mirror Lake, Pineridge, Schroeder Creek, Shutty Bench and Woodbury Village all have high-speed broadband.

“There is an entire spectrum of businesses that couldn’t exist,” says Tim. “Sure, it’s a beautiful place with a low cost of living, but we sucked at bandwidth.”

The new fibre optic cable was a total game changer for those trying to run a home-based business, and Kaslo quickly became a town of telecommuters. The area is now home to all sorts of internet-reliant companies such as Blair Enns’ Win Without Pitching business development training and Karma Halleran’s Pennywise Publications websites, plus a growing number of software developers and global consulting companies.

“We get people living here because they can,” says Ryan “I bought here. I live here. I think this is heaven. But a digital backbone is the piece that makes it possible to make a living out of the major economy, and spend it here.”

The Kaslo Hotel, with its new video conferencing boardroom, is now a gathering point for people from all over the region.

This blog post is part of an ongoing series focused on the technology sector in the Kootenays. It is supported by Kootenay Association for Science & Technology and Imagine Kootenay. Read the next post in the series: Enterprising outdoorsman leads in sales solutions from Kimberley.