When Craig Campbell first laid oars in the Ottawa River in the early 1990s, pulling at the heavy whitewater with the strong backbone of an Ontarian who’d grown up canoeing, he knew he wanted to do it for the rest of his life; guiding people down rivers in kayaks and rafts called to him. But so did something else.

“I’ve always been a very independent person, and liked the idea of working for myself,” he remembers, adding that his dad before him was a serial entrepreneur, laying the genetic bedrock of industrialism in him. More than two decades later, Craig’s going into his 20th year of operations at Kimberley’s Kootenay Rafting Company, a business he founded in 1998 that’s steadily employed up to eight people a season since.

It all started with the Adventure Guide Program at Kamloops’ Thompson Rivers University (TRU), Craig says, where he first drew up a business plan. Inspired by a weekend visit to Kimberley, where he found an abundance of untapped rivers and natural wonder, he knew where to put his plan into action.

“They were just starting with the destination development as the Sullivan Mine was closing, and they were transitioning into a tourism economy,” he remembers of the town that spellbound him.

Today, he balances his bustling business with a gig teaching in the very same program he came up through. He also wields a masters in Tourism Management from Royal Roads University, and believes wholeheartedly in mentoring the same values that paved his path. His is a holistic approach where every guide (often hired from TRU or a similar program) not only runs rivers, but also learns the entire business. Whether it’s driving the bus, doing the bookings, marketing or leading a trip, Craig’s operation is a place to learn how make a full life out of adventure. From the Saint Mary River, to the White, the Bull and the Elk (all itineraries Craig hand developed), the days are packed – staff or guest.

“The nature of adventure tourism is there’s always something new and exciting every day,” says Craig. “You get into this to live a life rich in experiences.” 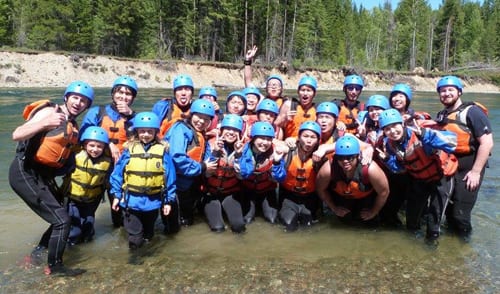