Nelson has always been home to industrious people. It’s obvious in the buildings themselves. Take the old brick factory on Front Street, or the many other utilitarian factories preserved and still in use today; only, now housing completely new industries.

The brick factory is now an office of engineers, urban planners and home to D-Pace, a company that designs components for particle accelerators used around the world. In another old, nondescript building, Wildlife Genetics International analyzes DNA to construct a framework for future biologists. The old jam factory is now a co-working space — one of a half-dozen shared office spaces dotted around town to host a growing number of cyber strays, each with their own line of work.

NEW INDUSTRY ON THE BLOCK

Virtually every building downtown has changed hands. While the same could be said about many downtowns, what is unique about Nelson is the type of work going on behind its walls.

Much of Nelson’s modern workforce now consists of a wide swath of tech-types, including several so-called digital nomads, working remotely for themselves, a startup or even a large organization such as Facebook or Shopify. 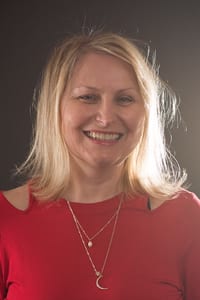 “We’re very much on the pulse of tech,” says Rose Hoeher, a business strategist (along with about a million other things) in the Nelson tech scene. She says the potential for the tech industry in Nelson is huge; it’s the perfect environment. “There are lots of techies, so you won’t be lulling. It’s very grassroots and friendly.”

Rose has been instrumental in growing Nelson’s digital economy. She’s a driving force behind the Nelson Innovation Centre — scheduled to open in 2019 — that will help support future tech entrepreneurs. As a business-development consultant, she hosts monthly tech meetups and always has several projects on the go at any given time. She runs the popular Nelson Tech & Knowledge Workers Facebook page, and she’s behind Startup Nelson and local chapter of Ladies Learning Code.

“I know everybody, period,” she laughs, adding, with colleagues she calls herself the Paris Hilton of technology. “I sort of dabble in everything. Unless you have an error message on your computer — don’t call me for that.”

FROM BOOMTOWN TO GHOST TOWN (AND BACK AGAIN)

Nelson has had a wild economic ride. Much of its business changeover coincided first with the CPR ceasing operations at its maintenance station in the ’70s, and then later, when the Salmo-Creston highway bypassed town. After the Kootenay Forest Products sawmill closed in the early ’80s, Nelson almost became an overnight ghost town.

But as Nelson grew less industrial in the 90s, its cheap land fuelled an attractive real-estate boom. By the early 2000s, with the help of a federally funded Main Street program, Nelson stripped aluminium cladding and façades from its downtown buildings, restoring them to their original glory, and a newfound tourism scene emerged. This in turn gave rise to a thriving food and arts scene. Pretty soon, this old resource town had it all.

Now it turns to tech.

“Once the Internet came to be, it really made [this tech boom] possible,” says Dr. Morgan Dehnel, who founded Dehnel Particle Accelerator Components & Engineering (D-Pace) in 1995. Nelson born-and-raised, Dehnel returned to his hometown after finishing his PhD at the University of British Columbia. For him, like many internationally based digital nomads set up in downtown offices, high-speed Internet, proximity to an airport for travel and shipping, and proximity to the U.S. made moving to Nelson a no-brainer.

Their work may be all over the world, but they choose to make Nelson home for the lifestyle and cost of living.

Nelson still draws its share of peaceable “feather and leather” residents who come for the mountain lifestyle and thriving cultural scene. But it is increasingly home to a wider range of techies, cyber strays, PhDs like Dehnel, as well as the occasional CEO who chooses to relocate the entire company.

The Vancouver-based IT company Traction on Demand recently announced plans to open a satellite office with two dozen employees in Nelson.

To think “Queen’s City” was at one time nearly selected as the provincial capital, went to almost being a ghost town, and came back on top as one of the most desirable and tech-positive small cities in Canada, is impressive.

Best of all, this convergence is generating a cumulative effect. Digital nomads are normally independent and isolated from one another. The workforce is hard to pin down and quantify. Rose jokes she has to “shake the bushes” to find them. But Morgan believes Nelson is just getting started.

“As we get more and more techy companies, that’s when we really start interacting,” he says.