Walking the banks of the Columbia River outside the town of Golden with a fresh catch of rainbow trout and two beaming clients by his side, Dave Burns wears a smile you could see from the moon. Only two years earlier, the 41-year old single father was a full-time “professional sawdust maker,” as he puts it, self-employed as an artisan furniture maker in a town he adopted 15 years earlier for its skiing and mountain biking. After the 2008 economic downturn, though, things got tough in the trades. After eight years of ups and downs, he finally made a change.

“I officially launched my business, The Golden Gillie Fishing Tours, in 2016,” he says. “My goal was to do 20 tours – I ran 43. And this year I nearly quadrupled that.”

Today, as the most sought-after fishing guide on the northern stretch of the river system he calls home, the industrious entrepreneur still makes some of the best heirloom-quality timberworks in the Columbia Valley, but only part time. The rest, he’s living his dream, which is quickly taking over. The dedicated outdoorsman who grew up angling with his brother in Nova Scotia is now gleefully spending more time outside and, most importantly, with his daughter.

Dave’s story is only one in a movement that’s sweeping the Kootenays. Tradespeople and urban refugees alike are transitioning in droves from traditional industries into the tourism sector in a bid to reinvent their lives. Many are realizing the Kootenay Rockies region is the sweet spot. Between 2007 and 2017 alone, tourism in the area grew 17.5 per cent. Still, the region manages to avoid the hyper competitiveness of other destinations and presents a pristine natural setting people the world over want to experience – with enough space not to feel crowded. 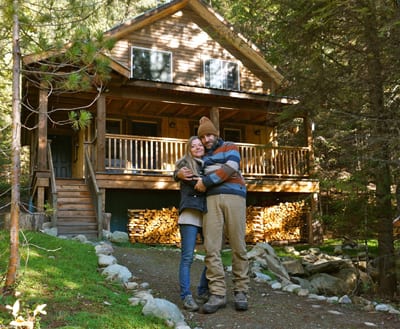 For Annelies Ellerman and Paul Hulshoff, that last point is a big one. The Dutch couple met in 2010, and realized they shared similar dreams. Paul was working for UNICEF in Iran, and Annelies was a diplomat for the Netherlands whose last posting was in Haiti. Throughout their travels, both had independently dreamed about opening a guest house hosting other world travellers. They originally wanted to be in Africa, but inadvertently fell in love with Canada while visiting one Christmas.

“Paul and I always had this expat feeling,” Annelies explains, “and we thought it would be nice to settle somewhere where we’re not foreigners anymore. The culture in Canada is close to our own, and BC has a provincial program to attract foreigners to buy existing businesses.”

After a two-month stay in Nelson that left them spellbound, a 42-acre property came up in the nearby 231-person hamlet of Ymir, close to Whitewater Ski Resort. The idea to build from the ground up soon became a reality, and in 2014 they opened Logden Lodge: four upscale cabins of impeccable quality that house their private art collection, with undisturbed night skies and barely a cricket to bother you.

“We made some projections in terms of revenue in so many years, and we beat our own expectations,” Paul says excited. “It was a deliberate decision to keep it small scale and boutique. When we started this adventure we decided we didn’t want to do anything that would be more living for the work than the other way around. We love hiking and skiing and all of that.”

Thirty kilometres down the road, in the “Queen City” of the Kootenays, Rob Little works the opposite end of that spectrum as the general manager of The Adventure Hotel – one of Nelson’s busiest accommodators of outdoor enthusiasts. In addition to the hotel, the 1913, Victorian heritage building also houses two restaurants, a café, and a liquor store. In all, there are 95 employees. 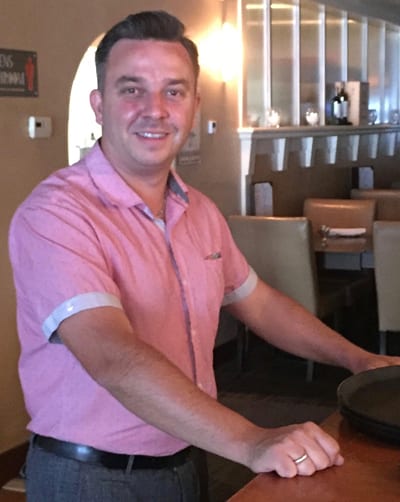 Rob, who built his career in hospitality, previously worked at Silver Star Mountain Resort and was later headhunted by a property management company in Vancouver, where he met his wife – who is originally from Nelson. Soon enough, the couple ended up back in the Kootenays.

“When I came to Nelson, my background had been in running large-scale hotels and high-volume restaurants,” he says, explaining the ability to move around in hospitality is super attractive. “If I’m running the Ramada, I could get hired by Marriott Hotels in two seconds and find another manager job. … I think there are a lot of people that are transient in this business, and it’s because they want to travel and work.”

Now settled, Rob says that, like him, four of the senior management staff at The Adventure Hotel were promoted from within the business. “You can make as good a living in this industry as any. The food and beverage in Nelson is incredible. There are more eateries per capita, I believe, than anywhere in BC. And they’re all prospering.”

“I love where I live, and waking up and looking at the views every day, and playing golf and going skiing,” Rob affirms. “And I love what I do, otherwise I wouldn’t be doing it.”