Sometimes we make a decision, doubt ourselves, then need a bit of distance to realize it was the right decision all along. That’s what happened with Maddie Van Horn, who was getting ready to buy the Trail Coffee & Tea Co. three years ago, then had second thoughts. A couple of years in Vancouver made her realize she wanted to live in her hometown and wanted that coffee shop after all.

Maddie bought the shop, dropped the Tea from the name, and opened it as her own Trail Coffee Co. in September 2018.

She worked at the shop on and off for three years as a teenager and says she kind of fell in love with the people and the atmosphere.

“Every table was a different story. Jeff Bruce, the previous owner, gave me plenty of freedom which was amazing as a young employee. It gave me an eye for what I could do,” Maddie says.

“One day Jeff said, you should buy it. And I said, yeah, I should buy it.” Maddie was 19 at the time, had the papers on the table ready to sign, but got scared, worried she was too young.

“I wanted to buy the business, but I worried about being so young and not having seen enough of the world before I settled down.”

She moved to Vancouver where she found serving jobs were different. She didn’t get to know the people she was serving.

“I am a very outgoing, social person, so I have always been drawn to the service industry and have spent most of my working life in it,” she says. “I was raised my whole life in Trail. The best part of living and working here is the people, the regulars, the homeyness, and the support. I didn’t find that in the big city.” 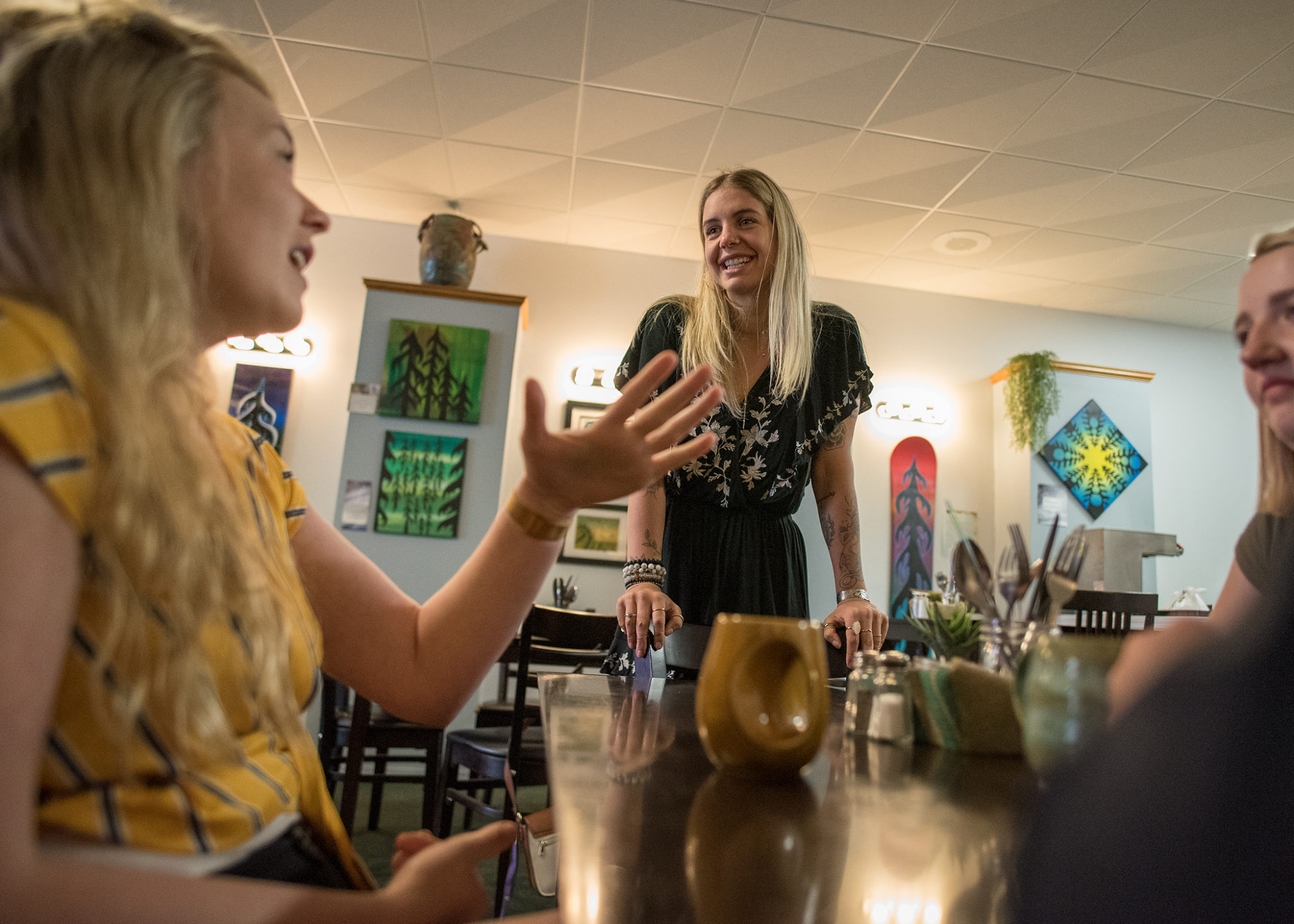 She moved back to Trail a year ago and quickly decided she still wanted the coffee shop.

“I came back to work here and it was still for sale. It became very clear to me that this is what I was meant to do. I’ve always loved this place. Lucky enough for me, purchasing the business was quite an easy decision. It was never really my dream to own any business, but it was my dream to own this business. I was certain with my decision, and drove to make it a reality.”

Maddie has renovated the interior to draw in new customers and has put her own spin on things. She focuses on supporting other local businesses with all local art such as paintings, photographs, wood carvings and pottery on display.

Trail Coffee Co. also roasts its own coffee beans right in the restaurant, one of three local roasteries in the West Kootenays. She gets much of her produce hand grown, picked, and delivered from a local farmer in Pass Creek.

“I am a 22 year old business owner which makes the whole scenario unique as well. I want my customers to know that I am young and eager and highly capable. I dream of expanding my business as far as my community allows me, and if there is anything ever that anyone is in need of, I strive to make it happen, to get the job done, to simply never have to say no to any customer.”