If someone told you they skied first tracks, climbed monkey bars and blew stuff up for a living, would you believe them? You would if you lived in Golden, and you knew Lisa Roddick. The slight, blond, wise-cracking outdoorswoman is now going into her eighth season as a professional ski patroller at Kicking Horse Mountain Resort, and her fourth summer as a Kicking Horse via ferrata guide. What’s a via ferrata? It’s an Italian phrase for a series of steel steps and cables permanently affixed to a mountainside along a dedicated climbing route. 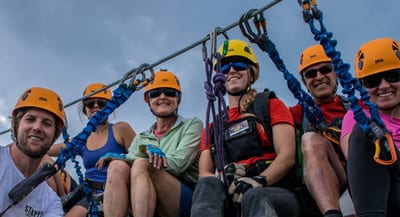 “I helped build it,” Lisa says proudly, as she circumnavigates that same snowy wall along the ridge of Terminator Peak, to work an avalanche control route as winter sets in. “For the Via Ferrata, I’ve been there since the beginning, which is neat because I haven’t done that before.”

That’s saying a lot. At 33, the Burlington, Ontario, native has an impressive resume. Since graduating with honours from the Outdoor Adventure Program at Algonquin College, she’s taught skiing, been a raft guide, become an accomplished whitewater kayaker, a highly trained member of Golden and District Search and Rescue, and also works ambulance shifts as an emergency medical responder. But her role as a level-three (i.e. senior) member of the Kicking Horse patrol is what keeps her the most impassioned. 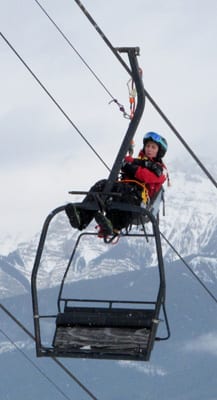 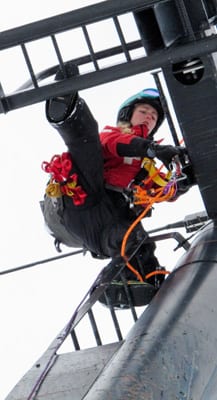 “It challenges me every day,” she says. “We have a super tight-knit crew; it’s like family. There’s never been a point where I haven’t been encouraged by my coworkers or superiors to learn more about avalanche-teching, forecasting or first aid. I’m excited to go to work every day.”

In between meticulously prepping avalanche control bombs – which she gets to personally chuck thanks to a blasting certificate – Roddick also pauses to boast that Kicking Horse has “the sickest terrain.” She adds that her favourite river runs and bike trails are right out her front door in Golden, and that she’s looking forward to someday soon adopting and training an avalanche dog with her equally adventurous husband.

Carefully skiing along a knife-edge ridge and into her control position, she jokes that she’s had to make a few sacrifices over the years, like “fast cars and diamond rings,” but is adamant she’s landed exactly where she always wanted.

You can follow Lisa Roddick on Instagram @lisaelizabethroddick and the antics of the Kicking Horse Patrol @kickinghorsepatrol.

Want to work in the Kootenays like Lisa? Visit the go2HR Job Board today!