Everyone on site is already busy working the morning that I stop by to check out the Firewood Project. Job coach and supervisor Guy Duchaine is demonstrating how to build corners for a pile of wood. The mood is cheerful and gung-ho. Everyone is eager to get working.

For the group of five people participating in the training, today is about more than just learning how to buck, split and stack wood. It’s also about how to work as a team, doing satisfying and meaningful work. 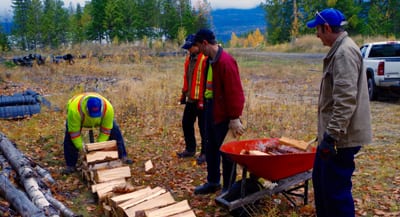 The Firewood Project is one of several social ventures run by Arrow & Slocan Lakes Community Services (ASLCS). In partnership with Nakusp and Area Community Forest, it gets folks who want to work but might need modified employment out bucking and chopping firewood, and then selling it at a great rate to locals in need.

The program sold over 50 cords of wood this year, according to Social Venture Program Coordinator Colleen Scissons.

About half of people with disabilities in the Nakusp area are currently unemployed, according to ASLCS. But the social ventures program is helping change that. ASLCS has been very active in creating opportunities as well as recruiting employers and offering training for both employers and employees.

At the moment, the program has eight people working in social ventures alongside their job coaches. For instance, there’s Kim, who works with EZ Shredding, shredding documents for businesses and individuals around town. Camera-shy, she wouldn’t let me take a picture of her while she worked, but I watched as she professionally ensured all the documents had their paperclips removed before being fed into the shredder at just the right speed. 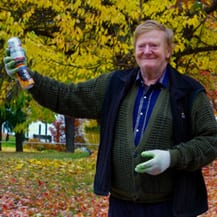 Another example is Robert Mentens, who sorts bottles and cans that get deposited in the “Pay It Forward” trailer, where the proceeds go to youth sports programs. When I caught up with Robert, he and his job coach Janet Royko were busy sorting. Besides being King of Cans (he knows exactly what kind of containers go where), Robert has a mind for figures, and can quickly calculate the number of cans or bottles that fit into transportation containers.

The benefits of the social ventures program go far beyond driving down unemployment rates. Employees form lasting relationships, have greater financial security and spend their money locally. And the best benefit is that the community gets to see the great and varied abilities of its citizens