He launches in with deep, damp licks dripping swamp water right out of the Delta. Born of blues, his rhythm is opposingly upbeat. Next, his wailing vocal tremolo shores up a bellied tone that undercuts the seriousness of the lyrics, “I’m going to make it big, play on that big stage…” The song doesn’t take itself seriously, but is still masterfully polished. Like its composer, it’s a walking contradiction.

At a youthful 40 years old, with his first full-length album in hand, Ali Haeri – who goes by the stage name Al Lee – took the long way ’round to his dreams. Listening to him at a music festival, a ski-town bar or by record, you’d never know you were rocking out to a computer programmer-turned-snow-scientist-turned-musician. Today, Ali – a joyful Revelstoke resident and new father – has struck a long-sought balance playing music in the summers and ski guiding in the winters. But it took a while.

Born in Iran and raised in Montreal, the calm-spirited overachiever loved skiing more than anything growing up. After graduating university with a degree in computer science and working as a programmer until he was 25, he wasn’t satisfied. He quit, moved west, and worked towards a ski-guide certificate. When he finally got it, he landed a job as an avalanche technician in Glacier National Park. It was a government snow-science gig, and steady work. But the same pent-up feeling eventually took hold. So two years ago, he left to pursue the dual passions that now make up his life, finally putting his guide’s certificate to its intended use. Busier than he could ever imagine being, freelancing has turned out to be his dream. 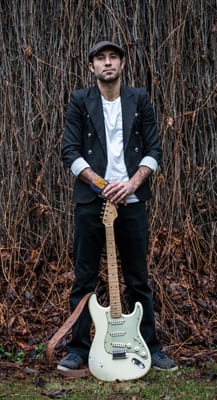 “I think I’m pretty much going in the opposite direction everyone else is,” he says laughing. “Comfort kind of scares me.”

But this has always been obvious. Ali isn’t just a ski guide, he’s a highly accomplished ski mountaineer with descents in the history books. He says steep skiing and music aren’t the most obvious combo, but are actually very similar.

“It’s the feeling of accomplishment,” he explains. “Both are risky. Conditions might have sucked, but it doesn’t matter. The fact is you did it. That’s very much the feeling you get after you’ve performed.”

And, it would seem, after you’ve had the courage to reinvent yourself as many times as it takes.

“A life that’s too scripted is something I try to avoid,” the happy freelancer now proudly posits.