Standing in a mess of wires and half-built walls in the space above Revelstoke’s Chamber of Commerce, you need some imagination to see what’s taking shape, which is apt, because it took a whole lot more of it just to get it to this point. Once finished, this will be the Revelstoke Idea Factory, a home-grown fabrication lab that will also serve as a cultural hub for the town’s growing tech sector. Set to open in summer 2021, the Idea Factory will be capable of rapid prototyping, in-depth skills training, and will offer some of the most forward-looking and practical education available for our changing world—a rare offering in a town this size, and a setting this rural. But that’s exactly the point.

“Up until now, people in the city haven’t had access to this kind of technology and we have been missing out,” explains Hayley Johnson, the City of Revelstoke’s tech strategy coordinator. “And the reality is a lot of the kinds of jobs that are around today aren’t going to be around by the time our kids have graduated from university.”

But the project is about a lot more than just cutting-edge technology, it’s about realizing ideas and fostering a community where they can be made real in a 21st century context. Holding pace with the economic times has never been an easy task for small towns, but the City of Revelstoke has been making a concerted effort to be at the front of that race since 2017, when it launched its first tech strategy. Out of that coalition of minds, and the critical mass of tech and tech-enabled businesses that it brought together, sprung the idea of a fabrication lab to empower the business community, and train the local population. A committee formed, which then became a not-for-profit called the Revelstoke Fabrication Lab Society in 2018—acquiring equipment and beginning programming. The society stands as its own entity now, and is hard at work on opening a purpose-built location for 2021.

“There was a definite gap in the tools and equipment that was available to entrepreneurs,” says Steve Baker, The Idea Factory’s Lab Coordinator, who’s overseeing what will become the day-to-day workings of the physical space. “It’s all related to helping people adopt technology and keep up with the fast-pace of change right now.”

In turn, the Idea Factory will be equipped with two different kinds of 3D printers that use plastic and resin; a laser engraver that can cut and do rotary etching; a 3D scanner; soldering stations; and powerful laptops to run programs required for 3D scanning and designing, like CAD.

If that sounds somewhat familiar, it’s because it follows the trail blazed by similar facilities already running, but with careful consideration for what’s available in this specific region. Selkirk College’s Selkirk Technology Access Centre (STAC) in Trail is the next closest such enterprise in the Kootenays, and the Idea Factory is the yin to its yang.

The Idea Factory will have two main capacities: businesses or individuals can “hire a maker” to have a product made for them, or there will be commercial and individual memberships for anyone that wants to make anything for themselves.

While the commercial and individual memberships (which are designed to be extremely affordable) haven’t kicked in yet, staff and board members have already been busy making personal protective equipment (PPE) and other pandemic-inspired gadgets for the Idea Factory store. They’ve also been fulfilling commercial orders through the Hire A Maker program, which costs patrons $60 an hour to use, including design. Current clients include the Revelstoke Chocolate Company, for whom the Idea Factory currently prints molds, Downie Timber, and RUX.

For Downie Timber, the Idea Factory has been a critical lifeline since the pandemic hit. At that point, because of the soaring global demand for PPE, it could no longer procure the filters its workers needed for sawdust masks. But the Idea Factory was able to retrofit adapters to use a backstock of filters in new masks, so everyone could get back to work.

At RUX, a new company building slick storage packs, the Idea Factory allowed the company to switch its prototyping from USA to Revelstoke, so it’s now getting a two- or three-day turnaround instead of three or four weeks.

“Additive manufacturing has been crucial,” says Jeff Polster, the company’s designer. “Working with the Revelstoke Idea Factory allowed us to rapidly iterate through design concepts before committing to full-scale production tools, and 3D printing has brought our product to life quicker than we could have with traditional manufacturing processes. Having the Idea Factory available to me as a resident of Revelstoke has allowed me to complete design work in an affordable manner without the need to be in a major centre.”

Indeed, part of the ambition behind the facility was exactly this, to invite tech companies to either relocate or take their first steps in an inspiring mountain setting where the work-life balance is extremely enticing.

“We wanted to attract businesses that are interested in prototyping pieces for potential product development down the track,” Johnson notes. “And people who are already here can expand what they’re doing using this technology.”

Baker, for his part, dreams of seeing companies like Salomon sojourning in Revelstoke to be able to test and tweak its products in real-time, right in the mountains. And for local companies to have a shorter supply chain in times of need.

“Imagine being able to fix things locally without having to wait for a part,” he adds. “These machines can produce usable parts, it’s not just prototyping.”

And while the economic development side of the equation is obviously well-served, community-building is a big part of it, too. Programming for kids is already underway, proving they’re much quicker to learn than we think. Baker says eight-year-olds can master robotics kits in as little as a week.

That programming will extend to grownups, too, with affordable classes teaching design and production of anything these machines can build—which is almost anything.

And while innovation is inherent in the Idea Factory’s DNA, so is team work. It will share a building not just with the Chamber of Commerce, but also City of Revelstoke Community Economic Development Department, Tourism Revelstoke, Community Futures and the Visitor Information Centre—all of it overlooking the railway museum, framing the facility within the evolving industrial heritage of the town. It’ll also work closely with Revelstoke’s branch of the Okanagan Regional Library, which is building its own RevLab, a multimedia studio which will have complimentary programming and equipment.

That kind of collaboration is what brought the facility to fruition to begin with, as a shared project of the City, the School District, Community Futures and Okanagan College. At present, an estimated $60,000 of in-kind volunteer time is embedded in the Idea Factory, along with $108,000 from the City of Revelstoke’s Community Economic Development department, as supplied through a Provincial Government Rural Dividend grant, and $120,000 in Economic Opportunity Funding from the regional government. The Revelstoke Fabrication Lab Society also secured $14,100 in funding from Columbia Basin Trust Community Initiatives and Affected Areas Program to support Youth Programming.

Want to see what that will all look like in person? Stay tuned. 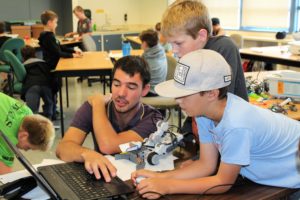