Is there any quicker route to success than the beer industry? For Invermere’s Richard and Karen Gendron, getting in on BC’s sweeping boom in suds has had the surprising side-effect of producing clients from around the globe, like Labatt and Budweiser. Their one company, Wyliejack Tap Handles, uses everything from 3D printers to lasers to design and prototype tap handles for draught beer, while their other, Sticker Nut, makes every kind of custom sticker imaginable, including for beer cans and their own tap handles.

Originally from Edmonton, Karen was a registered nurse and Richard was a graphic designer that made custom signs with CNC.

“I got into it pretty much out of high school,” he remembers, “I went to college and started my own business. I was lucky to know what I wanted to do.”

That was back in 1997, and business was good. But the money-centric city “rat race” got to be too much, even with their success. So in 2012, they sold everything and moved with their newborn son to Panama for a year. When they came back to Canada, they rebooted the sign business in Invermere, renewed by the calming Purcell and Rocky Mountains. 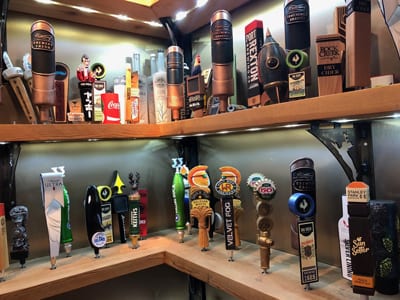 Then, one fateful day, the Arrowhead Brewing Company approached them to make some tap handles. They said yes, and it opened a market they never knew could be so big. Two years later, the sign business is on hiatus and they’re instead delivering taps and stickers to all corners of the planet, barely able to keep up.

“Wyliejack was growing really, really fast,” Richard remembers. “To the point that I was worried about making mistakes.”

One advantage of Invermere, he recalls, was the availability of business support services like the Basin Business Advisors Program. Their advisor helped streamline production and cut costs, and gave a general understanding of how to do world business from home. And while Richard concedes some facets of big business are a bit harder in a small town, finding happy staff isn’t.

“It attracts the right kind of person,” he explains. “Let’s say I need a high-end graphic designer, it’s easier to attract them to here – if you can pay them the right wage – than to Calgary. For most people it’s kind of a no-brainer.”

This blog post is part of an ongoing series focused on the technology sector in the Kootenays. It is supported by Kootenay Association for Science & Technology and Imagine Kootenay. Read the next post in the series: Fly-fishin’ CEO reels in huge opportunity in clean technology.