BC Hydro Supports a Legacy of Prosperity in Revelstoke

BC Hydro supports a legacy of prosperity in Revelstoke

If there’s one thing that defines British Columbia, it’s water. From the Pacific Ocean to the Interior, this is a place carved out and hemmed by H20. The mountains were shaped by it, and the ecosystem flourishes by its abundance. First Nations have thrived here for millennia thanks to the dense arterial system of creeks, rivers and lakes. And today, all those waterways produce a key element for a new kind of modern prosperity: electricity. Over 90 per cent of the power in this province is clean and renewable, flowing from 32 hydro-electric generation plants. The two most powerful of which sit on the Columbia River, and the most powerful of those in Revelstoke.

Walking through the Revelstoke Dam is like visiting the set of a James Bond film: the booming scale of it seems fictitious—like it’s some villain’s lair. The primary-coloured dials and switches are so simple they look like props. But they’re not: The turbines at the Revelstoke Dam started spinning in 1984, since then it’s produced about a sixth of the power for the entire province. Lake Revelstoke, the body of water it creates, holds back 5.3 billion cubic metres of water. Enough to fill over 2 million Olympic-sized swimming pools.

But this power station, owned by BC Hydro, produces more than just gigawatts. BC Hydro is also one of the best employers in the province and has been a formidable force in the economic development of towns like Revelstoke, helping them thrive through the booms and busts of the resource industries.

“As far as a regular job, it doesn’t really get much better than this,” says Jesse Smith, BC Hydro’s field manager for Revelstoke.

A clean-cut and sharp-witted guy with a meticulous sense of organization, Smith’s current position underscores a surprising past. He was once an aspiring pro snowboarder, riding for Team Canada. Clearly fit and sporting multiple tattoos, his is a dual life one might not expect from someone whose job it is to make sure that hundreds of thousands of lights stay on every day and night.

“Snowboarding was the career path I thought I was going to be going down,” he explains while walking me through the massive halls of the 175-metre-high dam he takes care of now. “But I was still living in Alberta, so I was doing my electrical apprenticeship. I ended up focusing more on doing that.”

Now 38, Jesse first visited Revelstoke when he was 16, on a stopover via a bus that was taking him from Edmonton, Alberta, to a high-school band exchange in Kelowna, B.C. “We stopped in Revelstoke, and I was like, ‘This is where I want to live when I get older.’”

The glacier-capped mountains and incredible amounts of snow had a lot to do with it. But he was also captivated by the warmth of the little, brick-clad Victorian burg. In 1986, downtown Revelstoke had beautified, undergoing a $2.8 million revitalization that built a pedestrian plaza and restored many historical façades. The 3,000 workers the dam had employed during its six-year construction had bolstered Revelstoke’s economy enough that there was money to spruce the place up in the years that followed. After the dam construction finished, the city figured it should invest in being attractive: for tourism, and to encourage investment.

Twenty-one years later, the move proved prophetic. In 2007, Revelstoke Mountain Resort spun its gondola for the first time, broadcasting Mount Mackenzie’s snow-sliding bounty to the world, right above that same pretty, little town. Suddenly, people from near and far saw what Jesse did back when he was 16, and they flocked. The trick was that transitioning from a resource economy to a tourism economy doesn’t happen overnight, and professional-calibre jobs were still scarce.

Jesse had been taking his time breaking into the electrical industry. He studied at Northern Alberta Institute of Technology in Edmonton, becoming a journeyman electrician, and also got a business diploma. He and his wife bought a small place south of Revelstoke, near Nakusp, B.C., to get away when they could. But they never committed to the full move. Instead, Jesse worked seven days a week in Edmonton, getting sucked into the rat race.

“It was super unhealthy,” he remembers, “not doing anything except working and eating crappy food.”

Then, when he was 29, he was diagnosed with testicular cancer. The doctors found the tumour early, and removed it on his 30th birthday. Had they not caught it when they did, it would likely have killed him. Dodging that bullet put everything into perspective.

“We sold everything and just moved to Revelstoke and were living in a camper with no jobs or anything like that. I ended up getting a job with a controls outfit out of Kelowna that was doing the new high school and elementary school [in Revelstoke]. So I worked as their foreman on those projects. It was a massive pay cut, but Revelstoke was where I wanted to be.”

Jesse’s wife, a nurse, found work, too. But slowly he started having to work away from home, as local work dried up. Then, a temporary position opened up with BC Hydro at the Mica Dam, an hour-and-a-half north of Revelstoke. Working for Hydro was his “dream job.” So he went for it—and got it. Four years later, he was running all of BC Hydro’s infrastructure in Revelstoke. Today he’s raising two kids in the heart of his favourite mountains, with a clean bill of health, and his wife works flexible hours half a block from their house.

“Being able to have a stable career in an industry that’s really dynamic and interesting, and being able to do all of that in Revelstoke—I can’t think of a better combination in the working world,” he says.

And he’s not alone. BC Hydro employs 55 other full-time people in Revelstoke and 55 people at the Mica Dam. These folks look after the dams and generating facilities, the power lines and substations, and deliver environmental programs and capital improvements. Capital-improvement projects also provide a lot of work to contractors, like when they installed the Rev 5, and Mica 5 and Mica 6 turbines. As part of BC Hydro’s dedication to its people, the company even runs an apprenticeship program through which employees can ascend in the trades, which they partner with Okanagan College for. It also participates in the tourism economy: during the summer of 2019, the interpretive Visitor Centre at the Revelstoke Dam attracted 16,700 people.

Meanwhile, below it all, Revelstoke continues to grow and evolve. Not without its own pains at times (as comes with all economic transformations), but, so far, in the right direction. And always with a nod to its watery heritage.

“I like the diversity in people now,” Jesse says. “I think we’re still a blue-collar town in a lot of ways. I know we’re morphing into this resort town, but I still like the blue-collar, hard-work ethic that this town was built on. That’s important to have when you’re raising kids, that they see that diversity of how everyone survives and flourishes in a community like this.”

As for anyone looking for a new way forward, or even just their own way, Jesse has one piece of advice.

“It’s really important to do what you want to do. If you want to make something happen, you have the ability to make it happen. You’re in control.” 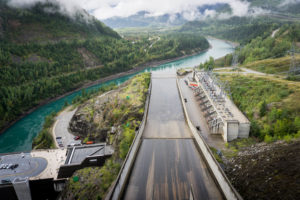 « R.K. Heli-Skiing Celebrating 50 Years » She believed she could, so she did!