Everyone’s done it. And anyone who hasn’t is either planning or dreaming of it: taking a year off. Maybe it’ll be after high-school, maybe after university, or maybe a decade deep into your career. But at some point, you’ll pause, take time for self-discovery, re-centre, and work a stress-free job you love just to live in a dreamy locale somewhere special in the world. The experience will tease you to stay forever. So what if you did?

In the Kootenays, you can. Home to some of the most storied natural landscapes and mountain towns on the planet, and a population of just over 150,000 people, there’s an average of only 2.6 people per square kilometre here – and plenty of room for you. Once the territory of lumberjacks and miners, B.C.’s southern enclave of mountain riches has opened up dramatically over the years. Travellers come from all directions for its quiet charm and exceptional access to uncluttered wilderness; where you can still get an alpine lake or untouched powder snow to yourself.

Tourism, today, accounts for more of B.C.’s GDP than any other single sector, and is growing steadily. The foundation of that industry is people – permanent people who live in the area to support it, and the region needs more of them. With a population of 4.6 million, and only 127,700 employed in tourism, B.C.’s largest industry is currently understaffed as a whole, and the opportunities to live and play in one of its most appealing areas are better than ever right now.

Cities like Nelson, Rossland, Kimberley, Golden, Fernie and Revelstoke have all experienced impressive growth over the last decade, thanks in part to an influx of urban refugees who’ve left large centres to reinvent their lives in smaller towns with unfettered access to the outdoors. With that migration has come the impetus for infrastructure and amenities that have made these communities – many within striking distance of major airports like Calgary, Cranbrook, Castlegar and Kelowna – highly livable for professionals. Restaurants, daycares, co-working spaces, breweries, shops and adventure companies have all sprung up in record numbers to help bolster local economies.

In a 2017 story for Kootenay Business magazine, journalist Mary Milner reported that the city of Revelstoke had more than doubled its development permits in three years, and that mayor Mark McKee, a 40-year resident, had never seen the town so thriving.

The movement has strengthened the availability of permanent, meaningful jobs – not just short-lived, seasonal employment. Accommodation and food services, for example, make up the largest portion of that. It’s an industry whose health Amanda Skidmore can attest to. The 34-year-old chef moved from Vancouver to Nelson in 2009, drawn by the city’s exploding food scene and alternative vibe. Today, she’s the head chef at Yum Son, a Vietnamese restaurant she herself helped establish. 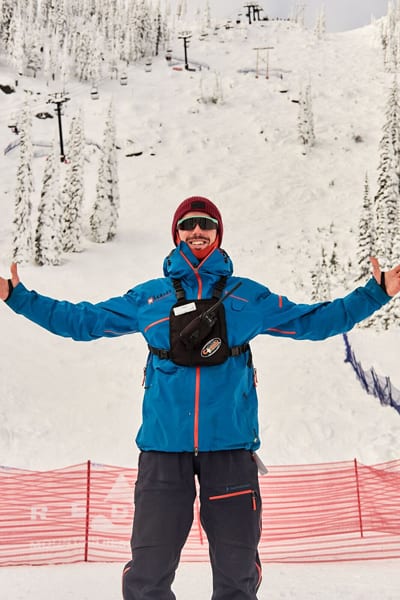 An hour down the road in Rossland, 26-year-old Ryan Lachapelle transitioned from ski bum to professional fun-maker as RED Mountain Resort’s events coordinator, working a full-time job and still skiing every day of the winter.

For Lisa Roddick, a similar dedication to her passions landed her in Golden, where she either kayaks, skis or mountain bikes nearly every day of the year. As a professional ski patroller, via ferrata guide and emergency medical responder, she’s made a career out of keeping people safe in the mountains, so she can be there too. Her jobs, atypical as they are, support a mortgage, an incredible home life, and at least one overseas trip a year.

Part of what makes a career in Kootenays tourism such a smart investment is that it’s largely self-sustaining. Most of B.C.’s visitation comes from within the province and neighbouring Alberta, making it a more stable market than far-fetched jet-set destinations. Weekend trips within and to the Kootenays are a staple pastime for those in and around the area – even during the hard times. In 2009, one year after the global financial downturn that nearly toppled many of the world’s biggest economies, tourism only dipped by 11.1 per cent in B.C., and the following year returned to steady growth.

It’s the kind of solid foundation that makes it a great place for creative entrepreneurs like Revelstoke-based musician and ski guide Ali Haeri, who goes by the stage name Al Lee. In complete control of his own time, Ali spends his winters freelancing for ski-guiding companies, and his summers playing gigs across the Kootenays. Jobs that might to some seem like merely fun seasonal hobbies, in fact, support his family.

For Brad Haga, this same revelation came later in life, when the Kimberley resident and family man transitioned from a career in forestry to running Mineral Mountain Ziplines in the Columbia Valley’s Fairmont Hot Springs. Another 184 kilometres south, Jikke Gyorki’s daily grind as the executive director of Tourism Fernie is simply to convince other people to come have the same fun in her home mountains she does.

From east to west, the Kootenays are full of people proving that, even as a responsible adult, taking a “year off” can last forever.