Chris Berarducci’s workstation looks like the helm of the Millenium Falcon. Piloting with a joystick, he’s surrounded by graphical displays, switches and monitors. Out the glass in front of him, though, isn’t hyperspace, but cedar logs on a mill. Berarducci is an operator at Revelstoke’s Downie Timber, where he’ll process up to 4,800 logs from this seat during his eight-hour work shift—nearly double what he could do just over a decade ago. If there’s one thing watching him work hammers home, it’s the leap this mill has taken on the industry stage recently. Adopting modern technologies has put Downie’s Revelstoke operation at the cutting edge of cedar milling worldwide.

While cedar grows in many countries, it’s only logged in a few locations around the globe. Canada is the foremost, and Revelstoke sits at the epicentre of the best stands of it in Interior B.C. Still, it’s a difficult wood to harvest, so not very many mills work with it. Compared to commodity timber—trees like pine and spruce that will get cut into structural lumber—cedar needs to be processed to appearance grades. It’s coveted as much for its aesthetic appeal and sweet smell as it is for its durability. It’ll be made into anything from decking and fencing to tongue-and-groove finishing slats and will last for decades.

Berarducci keeps his eyes locked on his work, surveying geometric scans of logs that show how to cut them the most efficient way possible, maximizing the usable square metres of lumber to come out. Downie’s able to make an average of 66 per cent of each log into lumber, which is where the best value is. That’s up 10 percent in the last 10 years or so. But the real push in productivity has come from making downstream products from waste. Within its full scope, Downie is more efficient than almost any cedar mill in the world.

Though it takes foresight and investment, innovation has helped Downie transcend the fickle moods of the market since the economic downturn of 2008. Part of the plant now laminates odds and ends together to make new lengths of flooring at a reduced cost. Another one processes offcuts into cedar planks for smoking fish. Downie is today the exclusive North American supplier of food-grade fish planks to Costco, the second-largest retailer in the world.

“We’re optimizing at the peak of the technology,” explains Angus Woodman, Downie Revelstoke’s aptly named site manager. “We’re the only cedar people doing it, so we have to lead the R & D. The Coast mills invested in optimization in the mid ’90s, before the tech got good.”

Like all mills, Revelstoke’s has been subject to the same tides of boom and bust that have made or broken small towns across B.C. for 150 years. The mill’s changed hands several times since it first opened in 1947, had times where it’s run at half capacity, and even been fully shut down. Today, though, it employs 300 people—which is hugely significant in a town of 6,719.

“It’s not typical of a small town to have such a big mill,” Woodman says, noting the operation’s added 60 jobs in the last two years by boosting productivity through tech solutions. What’s also not typical, is the quality of those jobs. While Downie continues to need Red Seal electricians, millwrights and a variety of traditional skillsets, these days you’ve got a leg up if you’re also tech savvy, and are into programming, like Patrick Kennedy.

From Kennedy’s post, you get a glimpse into modern milling. Flitches, as the rough dimensional cuts are called, pass through a series of scanners and lasers that look for colour variation, then decide what lateral dimensions to trim to.

“All this dark, that’s decay,” Kennedy says, pointing to a digital image on a monitor. “It’s what we call the trim line. I look at samples and tweak parametres.”

Kennedy, who’s 35, started on the production floor, as many do. When management discovered he had a knack for programming, though, they moved him into quality control.

“I learned it all in house, and it’s still ongoing,” he says, grinning past a youthful five o’clock shadow and shaggy hair. “This machine’s been here since 2012, I’ve been working on it for three years.”

While the software does learn over time, it’s not artificially intelligent. Kennedy is the brain, and the machine is the hands and eyes. What’s notable here is these upgrades haven’t made people obsolete, they’ve instead made more jobs. Greater production with less waste has allowed Downie to also make those jobs safer and better, presenting new opportunities for young people, like Kennedy.

“I grew up in Toronto,” he says, “but I was more of an outdoors guy. When I got to Revelstoke, I started at A&W.”

Today, Kennedy not only has a vocation, but he also owns a home in what’s become one of the most desirable communities in Western Canada, where he can imbibe all his outdoor pursuits every day.

Woodman says the mill offers viable living wages in a town where that’s otherwise hard to come by. Downie has also long believed in mentorship, and raising its own people. The starting wage on the floor is $29 per hour plus full benefits, you can access apprentice programs from within the business, and even get paid time off to go to school. Employees can go to Okanagan College, which has a local campus in Revelstoke, for anything from supervisor training to learning airbrakes, first aid and computer skills. Woodman himself grew up in Revelstoke and has a degree in forestry. He understands firsthand the value of on-the-job training, and investing in people. It’s how the mill’s gotten to where they use 100 per cent of every log.

“When you take a round log and make it into a square, you know you’re going to make chips,” he says. “That goes on to be mulch or animal bedding. Saw dust gets made into pellets, and all the bark [called hog] is shipped off and burned for energy.”

Some saw dust and chips are also burned on site in partnership with the Revelstoke Community Energy Corporation. The heat powers Downie’s kilns, and then goes into hot water that’s piped to 10 city buildings and downtown businesses, including the community centre and pool. To boot, Downie was able to replace its olivine burner—an old type of wood-waste disposer—with a modern furnace. The entire operation is so clean and contained, most visitors to Revelstoke don’t even realize there’s a mill a few blocks from downtown.

Progress has always thrived at the confluence of the best people and the best technology. In Revelstoke, today, some of the newest things are happening at one of the oldest businesses. 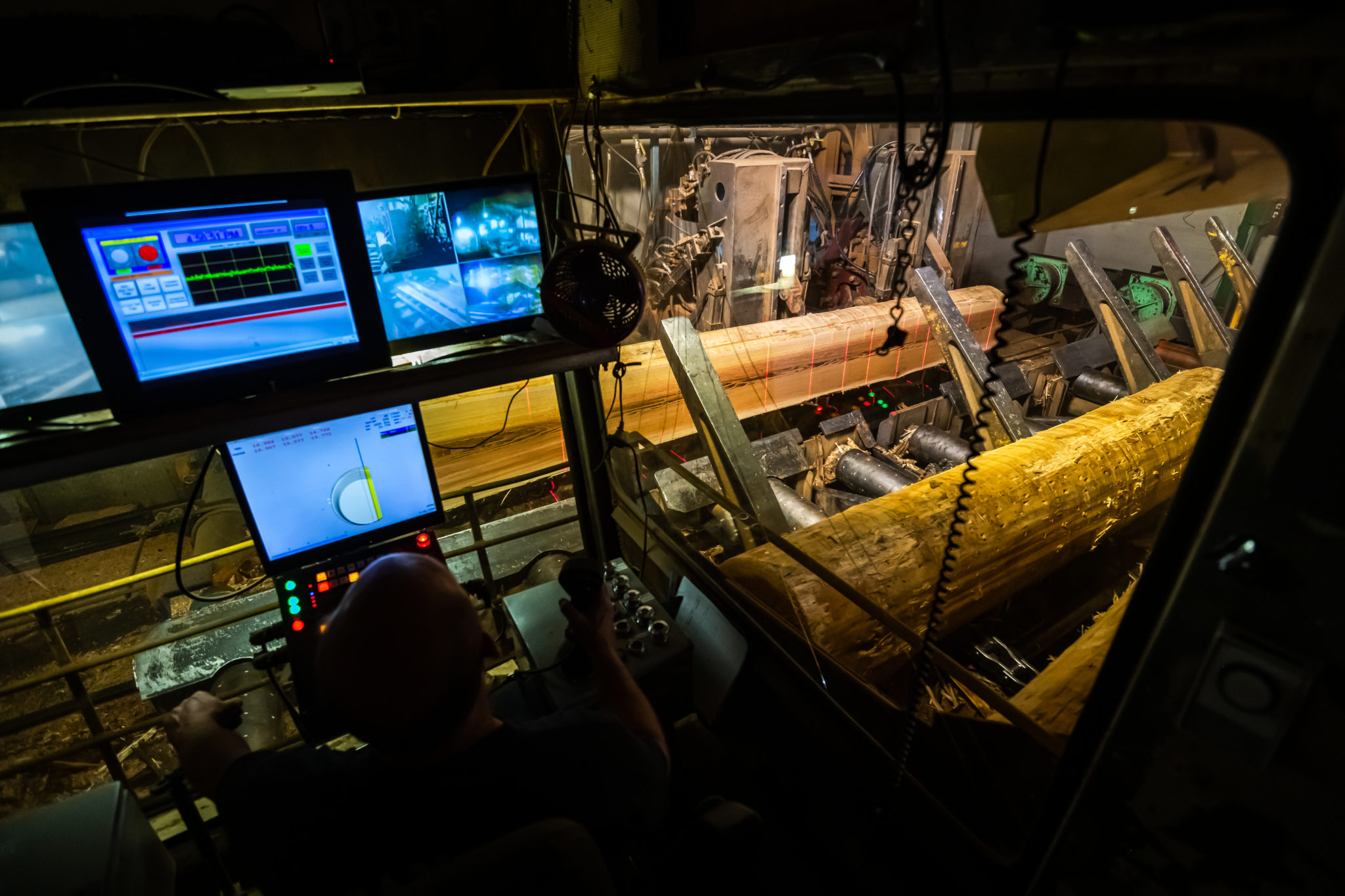